The north-west British Columbia is blessed with copious amounts of light, dry powder in December, making it the perfect time to experience some of the deepest days imaginable. Northern Escape have decided to open the doors early and share the goods next season.

Northern Escape Catskiing will offer skiers and boarders the opportunity to have it all; dropping into huge alpine bowls, steep old growth forest, and wild pillow lines.

Taking advantage of the vast quantities of powder that falls early season and makes Northern British Columbia the envy of the ski world – block your calendar for an amazing start of next season already. 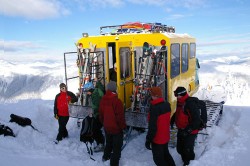 Location:  Northern Escape Heli-Skiing lodge is located 25 minutes by car outside Terrace, BC, a 2 hour regional flight from Vancouver.

Grouping:  Small groups, up to 6 people.